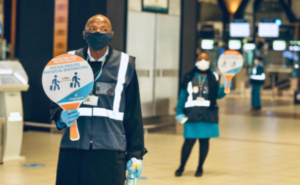 The South African tourism industry says that the country risks losing out on millions of rands because of concerns around the so-called ‘South African-variant’ of Covid-19.

The variant, which was first discovered by scientists in the country, has unfairly led to South Africa being targeted as a destination for tourists to avoid, industry stakeholders told parliament last week.

Because of this, major lucrative events – such as the planned Lions rugby tour – were in jeopardy, and accommodation and flight bookings were already being cancelled.

In response, the Tourism Business Council of South Africa (TBCSA) said that the country needs to come out with a unified message indicating that 41 other countries have seen a similar variant and that it is not unique to South Africa.

There has been a push to refrain from referring to the virus as “the South African variant”, and instead use its scientific name of 501Y.V2.

A United States presidential proclamation published at the end of January blocked entry for individuals who were physically present in South Africa for a 14-day period prior to entry.

In February, the United Kingdom named South Africa on a list of 33 countries that will have to undergo compulsory hotel quarantine before entering the country.

Both of these countries have also advised their citizens against travelling to South Africa.

Airlines not flying to South Africa include Emirates and Virgin, while a number of airlines have announced significantly reduced schedules.

Countries effectively closed to travellers from South Africa include:

The TBCSA noted that it is also impossible or arduous for foreigners to return home if they holiday In South Africa, meaning they are effectively blocked from visiting even if the borders are open.

The TBCSA said that the current situation is dire as South Africa has seen a trickle of foreign tourists – mainly for work and family-related travel. This means they typically don’t use hotels or tourism businesses.

“The British Lions tour likely to be cancelled or postponed or with limited/no spectators, while UK and Ireland fan bookings for travel are already being cancelled.

“This is a major tourism event and would be a great profile raiser and inspire confidence in destination South Africa – just when it’s needed.”

Now read: International travel unlikely to fully restart until 2023 – and you may need a ‘vaccine passport’